Welcome to the first installment of Mandatory Draw, a segment where I will showcase and playtest a specific card for one week. Before delving into the topic I offer the caveat that I do not claim to be an authority on what is or isn’t the best way to use a card. MD will be used as an experiment to improve my play and hopefully get feedback on using certain cards.

Manhunt was chosen as the first topic because it is good and people know its good but I believe it has untapped applications. This card is a great example of what has made Netrunner a successful game, the designers release cards that improve decks, just not the ones that are popular right now. Manhunt, while it can be used in near earth astrobiotics, it is arguably best used in different styles of NBN. I love that Netrunner constantly turns already released cards and archetypes back on with new releases.

Lets talk about what the card does in real terms, manhunt makes a runner spend 3-4 credits (link dependent) to avoid a tag if you are playing Making News or pay a click and 2 credits to remove the tag after the run. This is a huge tax, especially if you can force the runner to run on servers where they have no chance of stealing an agenda. A san san grid with manhunt in play costs 8-9 to trash plus the cost of breaking the ice or 7 credits and an additional click plus the cost of breaking ice. Manhunt is always going to get its value because the trace resolves before the runner accesses making them spend at least as much as you did to play manhunt to avoid or remove the tag.

This additional tax can keep your pad campaigns and dedicated response team on the board longer and slow down runners tremendously. In addition, manhunt is a direct tax to security testing and account siphon as your opponent will now likely spend more then they will gain and in the case of AS they will have to run it click one if they want to clear all the tags. This tax attached any run can reduce the runners credit pool making it easier to use midseason replacements or SEA source.

Something that is noteworthy about manhunt is its psychological effects. When you slap this card down on the table the runner immediately starts contemplating what tag punishment you are playing. This can lead to defensive play on their part, giving you more time to set up or score your first astroscript.

And now the deck, which I am calling “Cyber Terrorism Watch”

For this week I decided to go with traditional tag and bag using SEA Source. manhunt forces the runner’s credit pool down increasing the effectiveness of this archetype as the credit gap of 6 is easier to maintain. Midseason decks are really popular these days but I did not choose that archetype for a couple of reasons. First, midseason comes with baggage, you need psychographics, you need burst econ, and I did not have space. Also, midseason requires an agenda to be stolen where as SEA Source can be used after any successful run, making the kill more consistent. 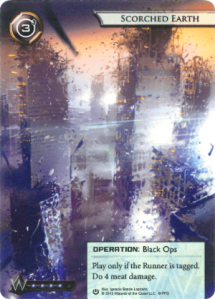 He’s somewhere in there it’ll be fine

The tax discussed earlier comes into play here, if they want to trash that san san grid, they have to dump the credits they need to stay alive which can make the runner choose between two bad decisions. This archetype is vulnerable to plascrete carapace but if they manage to protect themselves they still have to fear other tag punishment and it becomes an additional tax to help you revert to normal NBN fast advance. The runner may choose to turtle up and wait until they have a large credit pool, subliminal messaging punishes them for doing this and helps you maintain your credit lead and/or score agendas.

Good luck in your games and let me know how you are using manhunt.